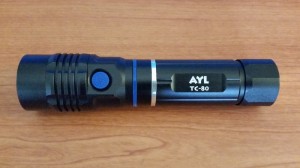 Some things are never really appreciated until they are absolutely needed, and when they are needed, they can be indispensable. Take flashlights, for instance. Years ago, I never thought much about having a flashlight until there was a power outage, or I was stuck on the side of the road changing a tire late at night. When something like that happened, a flashlight was the first thing on my mind.  Today, however, I like to be prepared for such emergencies. So when I had the opportunity to receive a free AYL TC-80 4-in-1 LED Flashlight in exchange for a review, I saw a light, so to speak.

The AYL TC-80 is an LED flashlight that can also convert into a small lantern or a flashing emergency beacon of sorts. It is sold by a company called Accessorize Your Life, which apparently is what the acronym AYL stands for. The company sells an assortment of tech related products, including cases and sleeves for smartphones and tablets, wireless mini speakers, and of course the TC-80.

AYL promotes the TC-80 as a “Tactical Emergency Nightlight with Telescoping Body and Magnetized Base – Water Resistant Spotlight for Work, Auto, Camping, Garage, Emergency – Battery Powered”. The flashlight is equipped with Cree® LED’s. Cree is a well known and respected manufacturer of LED lighting components, and a flashlight manufactured with a CREE branded LED is usually considered higher end.

The flashlight arrived packaged in a plain small brown cardboard box with no fancy labeling, graphics or frills. It was a very unassuming package indeed, and gave no hint of anything particularly special inside.

Then I opened the box. The moment I took the TC-80 out of its bubble wrapped sleeve, I was somewhat impressed. I saw photos of it online, so it was about what I expected as far as looks were concerned. However, it had some real weight and felt solid and durable. It was what I hoped for, and what I expected, but the reason it impressed me was because I wasn’t disappointed. It met my expectations.

The TC-80 takes 4 AAA batteries, and does not include them, so I had to shop for a pack before I could test the flashlight. (Most of my devices use AA batteries or rechargeable battery packs, so I didn’t usually keep the little AAA cells handy.) Once the batteries were inserted, things really lit up – literally.

The front beam consists of a CREE XP-E R3 Ultra Bright LED with a telescopic lens assembly capable of instantly adjusting from a narrow focused beam up to an almost 180 degree spread. The beam is very bright – the first time I turned it on it really lit up the room. The narrowest focus is so sharp it projects the shape of the square LED chip itself. I don’t know if that’s considered a good or bad among flashlight aficionados (and there is such a thing as a flashlight connoiseur, believe it or not), but that little projected square is really, really bright. 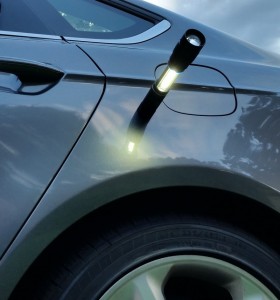 The most unique feature, in my opinion, is the mini-lantern built into the flashlight. The TC-80 has a telescoping base that, when extended, reveals a second light consisting of a COB (Chip-On-Board) strip light designed to serve as a tiny lantern. The power switch toggles between three modes: the front beam, the mini-lantern and a third light- a flashing red light that eminates from the COB! This is something that could come in quite handy and could even be a life saver if one is stuck on the side of a highway at night.

The TC-80 has one more nice touch. The base of the flashlight includes and embedded magnet, which is powerful enough to firmly support the flashlight when attached to a metal surface such as the side of a vehicle when changing a tire. Think of the possibilities! I know I can.

According to the product description, the TC-80 is made with aircraft-grade anodized aluminum, and is advertised as shock proof and water resistant. Now, keep in mind that water resistant does not mean waterproof. There is a difference, and it’s an important one. It may be able to take some moisture, and even some rain, but don’t drop it in a lake. I haven’t tested it in the rain yet, so I don’t know just how much moisture it can take, but it looks and feels fairly rugged, so it can probably survive at least a light sprinkle.

To summarize, the AYL TC-80 is a well designed and solidly constructed flashlight that can be quite useful for a number of applications when emergency light is needed. I personally think everyone should have a TC-80 or something like it in their vehicle or at their bedside, just in case. It retails for around $50 but you can pick it up on Amazon for about half that. This is not a cheapo plastic D-cell flashlight from Wal-Mart. The TC-80 ranks closer to a pro model. There are high end, professional grade flashlights out there that cost $100 or more, and while this isn’t the top-of-the-line as flashlights go, The AYL TC80 is well worth the retail price, in my opinion. At half that, I think it’s a bargain.

I received a free AYL TC-80 4-in-1 LED Flashlight in exchange for my honest review. The review, comments and opinions are my own.