Purina is offering a free sample of Purina One cat food. All you have to do is follow the link to their website and fill out the necessary information on the form and hit submit. Your free sample will be promptly shipped to your address. You must be at least 18 years old to order. The site also says to allow 6 to 8 weeks for your sample to be shipped.

This offer is valid between August 1 2017 until January 31, 2018, or until they run out of stock. Additionally, only one sample of cat food per household is allowed.

If you want to try out a new brand of food for your cat, or if you just want some extra free cat food, this is the deal for you.

There is an enormous array of products on the market to train your dog into full subservience. From simple leashes to elaborate electronic pet fences, there seems to be an endless choice of options of gizmos and gadgets available to properly train your pup. Now there is one more, the Cujo Control CC-810 Remote Training Collar. When we received one free in exchange for an honest review, we gave it a try. Well actually, we tried it on the dog.

The CC-810 is a dog obedience training device capable of delivering three types of disciplinary actions, including a high pitched auditory tone the dog can hear, a vibrating action the dog can feel, and a “stimulation” the dog can feel, or more precisely, an electric shock. According to the company, it’s a “safe but annoying” stimulation, and is “proven safe”. 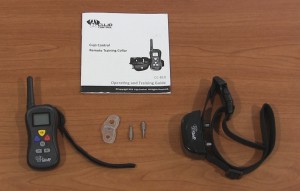 The collar is designed to accommodate dogs of almost any size, from small to large. The receiver unit attaches to the collar and against the underside of the dog’s neck. The receiver has two metal contact points. These contact points rest directly on the skin of the neck.

The receiver is controlled by the remote radio transmitter, which looks and feels like a small two way radio without the mic and speaker. According to the specs, it has a range of up to 300 meters, or about 984 feet. The transmitter can control up to two dogs with receivers (the additional receiver is purchased separately). It is equipped with a small blue backlit LCD display and a set of buttons to control the tone and type and intensity of the vibration or “stimulation”. The CC810 allows up to 16 levels of shock and vibration. When activated by the transmitter, the receiver delivers the appropriate response for as long as the particular button is pressed, up to a maximum of 10 seconds.

Both the transmitter and receiver operate on two AAA alkaline batteries. Four batteries are included in the kit, two for each device.

The CC810 includes a 31 page Operating and Training Guide. It is fairly thorough, with important safety information and warnings, assembly instructions, and step-by-step training procedures with helpful tips. It is, however, riddled with typographical errors.

We tested the CC-810 on Tommy’s dog, Cosmo. the results were, well, interesting.

Now, Cosmo is already a fairly well-behaved dog. We wouldn’t say he is fully trained in all areas of obedience, but he does understand a number of commands, and will usually respond to them as long as he isn’t too distracted. However, he is still learning, and he could always use more obedience training, and he was the only dog available, so he was the prime candidate to test out the CC-810.

First, Tommy assembled the CC-810 collar and receiver unit according to the instructions printed in the manual. He did this on camera for the CC-810 video review. The kit contained everything he needed for assembly, including the batteries (which seems to be the new normal for battery operated electronics these days). The manual was easy to read, but riddled with typos. Fortunately, assembly was simple and straightforward, so it wasn’t a big deal. 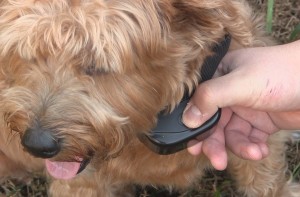 We put the collar on Cosmo, and took him outside to test it out. The manual suggested we start at the lowest level and work up to find his level of tolerance to the vibration and shock. There was no reaction at level one, but he began to respond to the vibration around level 4 and the “stimulation” (shock) at level 5, so we kept it there for awhile.

Following instructions in the manual, we first tested the tone on the dog. He could hear it, and the first time we used it, he did respond, but after that, he ignored it.

Next we tried using the vibration function. The first time it startled him. We tried it a few more times and Cosmo responded to our commands. Each time we used it with a command, he was rewarded with a treat. After several of these, he became used to the vibration and began to ignore us. Tommy raised it to level 6, he began to respond to our commands again.

Then Tommy tried the stimulation, or as I now call it, the zapper. Cosmo didn’t like it at all. After a zap or two at level 5 (the minimum threshold we initially set), it clearly upset him, so we didn’t use it again and stayed with the vibration instead.

The manual includes step-by-step procedures for using the collar to train a dog to come. We performed a variation of this one without a leash, using vibration and the word here. Since Cosmo already knew this one, he quickly made the connection and understood what we wanted him to do. The manual also included instructions to teach certain commands as well as deter or control several behaviours, none of which we tried, simply because after few tests with the command here, we felt Cosmo had already endured enough.

After removing the receiver collar from Cosmo, Tommy and I decided to check the stimulation for ourselves. We took turns placing the tips of our fingers on the contact points and pressed the button on the transmitter. Neither of us felt anything at levels one and two, and although I still detected nothing at level 3, Tommy did feel a slight tingle.

Then we both tried level 6.

The receiver delivered a strong electric jolt. It reminded me of a medical TENS unit that was set a little too high.

We decided not to take it to level 16. 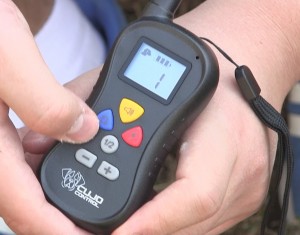 To summarize, The Cujo Control Remote Training Collar is best suited for young, healthy dogs with little or no previous obedience training. The transmitter is simple to use and works well in close range. The company claims a maximum range of 300 meters, however we didn’t test the coverage. There were no specs available for the radio, and there was no FCC ID on the device, so we were unable to determine its frequency band or wattage. Range depends on a number of variables, including terrain, nearby obstructions, interference, atmospheric conditions, and the quality of the antenna. As licensed ham radio operators, we can say that your range may vary greatly.

The receiver is a bit of a mix. Like the transmitter, it is simple to operate. The trick is to be sure it is attached to the collar, positioned on the dog’s neck and operated correctly. The kit we received included two pairs of contact points for the receiver, one longer than the other. We didn’t know which set to use, and it wasn’t explained or even noted in the manual, so we chose the shorter pair, based on the fact that Cosmo is a small dog.

The tone function is not very loud. Perhaps it doesn’t need to be, since the receiver is mere inches from the dog’s ears, and dogs do hear well. The vibration function is quite robust, and at higher levels can even be heard. As for the stimulation function (the zapper), while somewhat mild at very low settings, it is capable of delivering a surprisingly strong shock at higher settings. Although Cujo Control claims the device is safe, I have some reservations, especially if this feature is used carelessly or abused. Tommy and I each experienced an uncomfortable jolt at level 6, and that was on the low end of 16 settings! It may be needed for larger dogs, but for some smaller canines like Cosmo, I think the vibration function is probably sufficient for training.

The bottom line: The Cujo Control Remote Training Collar is not a toy, it is a serious training device and should be used responsibly. Used improperly or abused, it could make your dog frustrated, distrustful of you or even angry. It could possibly even hurt your pet. However, in the right hands, with the right instruction, and used judiciously, it can be an efficient and effective dog obedience training tool.

Disclaimer: I received this product free in exchange for my unbiased review. The opinions are my own.

Currently, there are multiple offers available for deals on pet food off the Rachael Ray Nutrish Pet Food website. You can choose from a variety of food for both cats and dogs. All you have to do is go to their official website and select one of the many coupon choices. After doing so, complete the form at the bottom of the website and proceed to download your selected coupon. All that’s left to do is go to a store that sells Rachael Ray Nutrish Dog Food and get your free sample!

The choices for cats consist of $2.00 and $4.00 off “Zero Grain Dry Food” and “Super Premium Dry Food”, respectively. There is also a buy-two-get-one-free deal for “Super Premium Wet Food for Cats” and a FREE sample of “Zero Grain™ Dry Food For Cats”.

In the dog section, you can get $2.00 off “Super Premium Dry Food for Dogs”. You could also get $4.00 off “DISH Dry Food for Dogs” or “Zero Grain or Just 6™ Dry Food for Dogs”, individually. Also available is a coupon for $1.50 off a pack of any Nutrish brand dog treats and a buy-two-get-one-free deal for wet dog food.

That’s a hefty selection of coupons, isn’t it? Keep in mind that you can only choose one coupon, though. So decide carefully. And you might also want to hurry, since the offer is only up while supplies last.

The website also notes that this offer is available only to residents of the continental United States.

Is your dog running out of treats? Do you really want to go to the store just to buy a five dollar bag of dog treats? Then how about you order a FREE bag of dog treats form the comfort of your own home? Maddie’s Organic Morsels is offering you just that with their promotion. Fill out the form on their official website to order a free bag of their organic dog treats.

The website reads: “At Maddie’s Organic Morsel’s, we care about what goes into our furry friends.  Our treats are made with all natural and organic ingredients.  They are lab tested with a Quaranteed Analysis printed on every lable.  They are produced right here in the USA!  We think you are going to love them!” Typos aside, it’s hard to beat all-natural dog treats that we’ll love, right?

VCA Animal Hospital is offering a free deal for signing up on their website.

If you register on their official website, VCA Animal Hospital will provide you with a coupon for FREE first pet health exam at the one nearest to you.

So if you need to do your yearly, monthly, weekly, or daily checkup for your pet, consider getting a free one by VCA Animal Hospital.